For its second quarter ended July 3, Sprouts Farmers Market Inc. has reported that net sales totaled $1.6 billion, a 5% increase from the same period in 2021. Net sales growth was driven by an increase in comparable-store sales and new stores opened.

The food retailer opened two new stores and closed three stores due to lease expirations, resulting in 378 stores in 23 states at the end of the quarter.

“The disciplined execution of our long-term strategy, with a sharp focus on near-term initiatives, delivered results that surpassed our expectations during the second quarter,” said Jack Sinclair, CEO of Sprouts Farmers Market. “As we celebrate our company’s 20th anniversary, I want to express my sincere appreciation to all of our team members for their passion and dedication to our customers.”

Sprouts made several moves in the second quarter to advance its long-term strategy. For example, it joined the nationwide distribution channel of Pod Foods. Under the deal, San Francisco-based Pod Foods provides about 130 Sprouts stores in the Southeast with immediate access to a virtual warehouse of emerging CPG brands, enabling the retailer to avoid supply chain delays and quickly stock the products that its customers want. Sprouts also partnered with Instacart to accept online Supplemental Nutrition and Assistance Program (SNAP) payments for same-day delivery and curbside pickup at its stores nationwide.

Meanwhile, the grocer ended the second quarter with $289 million in cash and cash equivalents and a $250 million balance on its $700 million revolving credit facility. In late March, Sprouts revealed that it had closed a $700 million revolving credit facility under a new credit agreement. The new credit agreement contains terms and conditions substantially similar to the previous credit agreement, with a commitment expiration date of March 2027 and the addition of sustainability-linked pricing terms, revised pricing terms for loans and commitments thereunder, and additional covenant flexibility.

Also during the second quarter, Sprouts repurchased 2.4 million shares of common stock, for a total investment of $65 million. The company generated cash from operations of $209 million and invested $46 million in capital expenditures, net of landlord reimbursement, year to date through July 3.

After another quarter of positive traffic, Sprouts CFO Chip Molloy noted that the company is relatively pleased with its financial performance year to date. “We are cautiously optimistic that we can continue to successfully navigate the remainder of the year during these highly inflationary times while simultaneously pushing forward with our long-term strategy, which is supported by our strong cash generation,” he said

The company’s full-year 2022 outlook is as follows:

For its third quarter, the company expects:

Phoenix-based Sprouts Farmers Market employs approximately 31,000 associates and is No. 53 on The PG 100, Progressive Grocer’s 2022 list of the top food and consumables retailers in North America. 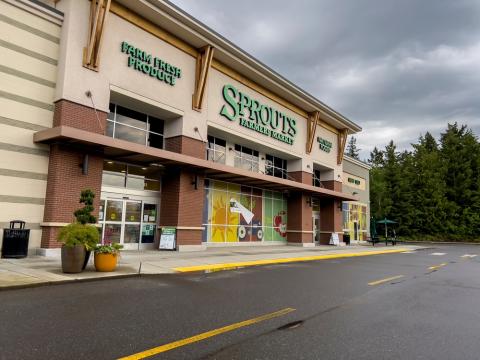 Sprouts’ net sales in its second quarter totaled $1.6 billion, a 5% increase from the same period in 2021.
Credit: Shutterstock; Progressive Grocer