InstagramFacebookLinkedInEmail
Miami’s Underline park has been talked about for years. Get ready for construction. 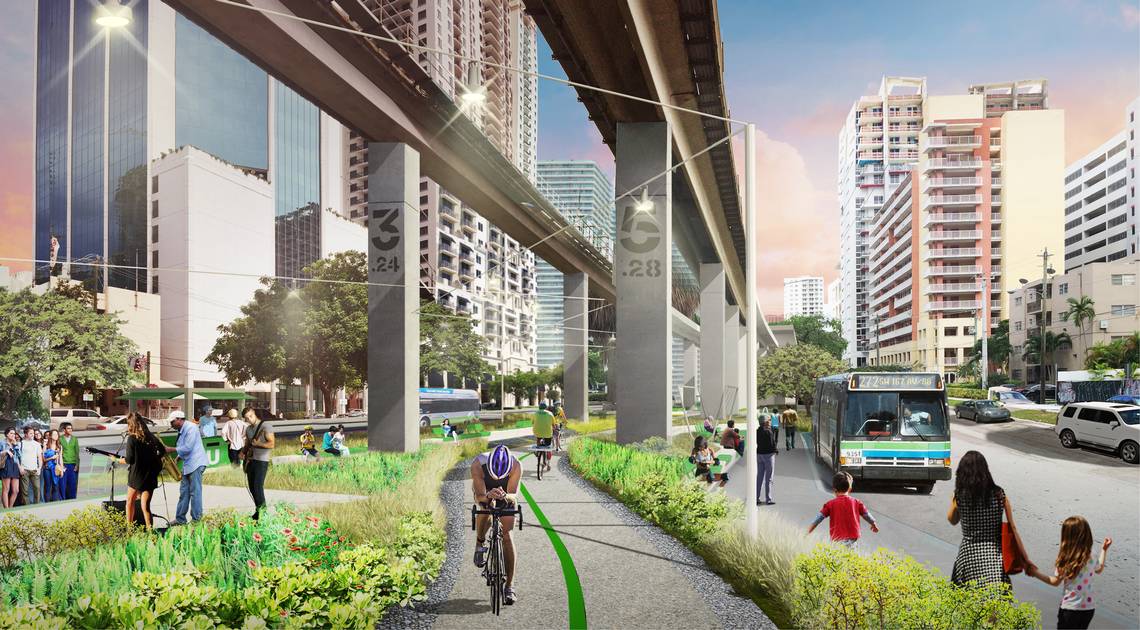 Miami’s Underline park has been talked about for years. Get ready for construction.

After years of fundraising, lobbying and hype, the planned Underline park under parts of Metrorail’s elevated tracks has a government construction contract, with Miami-Dade commissioners approving a $14 million agreement to build the first half-mile of the project off Southwest First Avenue in the Brickell area.

Using a mix of state, county and city of Miami funds, the two-year agreement approved Tuesday hires a partnership between a Hialeah-based specialist in walkways and a longtime Miami-Dade contractor.

The 18-month contract requires the partnership, Central Pedrail, to expand the current paved path under the Metrorail and add a mini basketball court, workout equipment, game tables, extensive landscaping and other improvements designed to create a “linear park” that would eventually stretch from the Miami River to the Dadeland South Metrorail station.

Building the entire 10-mile Underline park is expected to cost about $120 million, with another $3 million required to maintain it each year. The “Brickell Backyard” segment that was funded on Tuesday represents just 5 percent of the full Underline, but founder Meg Daly said she sees the launch of actual construction along the route as a larger milestone than the seven-block footprint between the river and Southwest Thirteenth Street suggests.

“Having fences up, showing that construction is happening, I think it will take us away from ‘will this happen?’ to excitement that this is happening,” she said. “When people see it, they’re going to be clamoring for more.”

Miami is getting a new 10-mile linear park stretching from Brickell to Dadeland South and we’re thrilled! The project will improve pedestrian and bicyclist safety, and connect our communities. What’s even better is that the park will be integrated with Paseo de la Rivera and Gables Station, two mixed-use developments under construction on US-1 in Coral Gables. For retail leasing information, contact Centre-Line at 305-576-9008

Miami-Dade’s transit agency will oversee construction. The $14.2 million project is funded with $5.4 million in county funds, $4.8 million from Miami, and nearly $4 million from Florida. The plan is to take an existing path and create separate paved trails for bikers and pedestrians. On either side of the trails would be spaces for activities, including an area for large events, such as yoga classes and movies.

The contract is expected to stretch into 2020, and the Underline nonprofit that Daly heads still has nine-and-a-half miles to get under construction contracts to fulfill a vision that began roughly five years ago. Daly said the group has secured about $90 million in pledges from governments for the project, leaving at least a $20 million gap assuming all of that money comes through and prices stay flat. There’s also the challenge of generating the $3 million a year for a spin-off nonprofit from the existing Underline group that Miami-Dade has agreed to let manage the 10-mile park.

Corporate sponsorships and private donations are supposed to pick up a portion of that tab, but the Underline is counting on public dollars to help sustain the new privately run park. For the half-mile Brickell portion expected to go under construction by December, the county expects to pay just $17,000 a year. For the entire Underline, Miami-Dade has only agreed to keep up existing maintenance costs of about $300,000, Daly said.

The “Brickell Backyard” portion that represents the northern tip of the Underline would be one of three wider park areas attached to the paths, with pockets of recreational facilities like basketball courts and performance spaces. A second would be constructed in the Coral Gables area outside the University of Miami, and a third in the Dadeland area. The bike and pedestrian paths will connect the three hubs, with signature features in between, such as art installations, decorative landscaping and exercise equipment.

Read the full article on MiamiHerald.com.