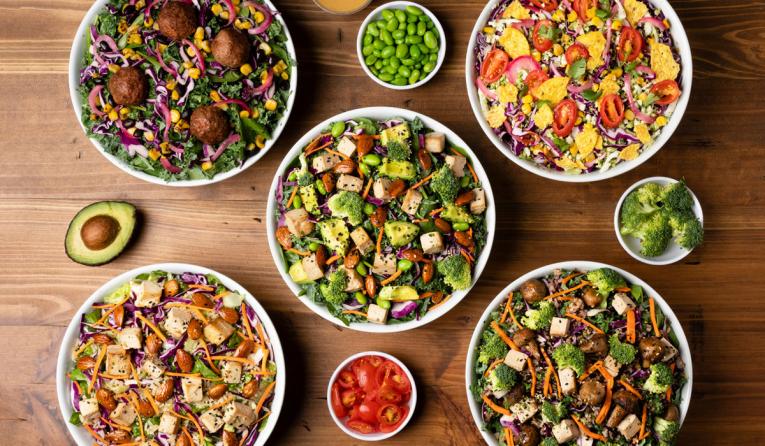 The chain hasn’t lost sight of its day one goals.

On the heels of its 50th store opening, Just Salad has much to say about its mission.

It’s one that hasn’t altered much since the salad chain’s day one vision in 2006, says Nick Kenner, CEO and co-founder. Making health and sustainability accessible remains the focus for Just Salad, which now spans the East Coast and Dubai.

What has evolved, however, are the avenues available to spread the word. Menu additions and improvements, store design elevation, and the build out of a team that supports the company’s goals have carried it thus far. Meanwhile, the price point hasn’t moved much, Kenner says, with a host of healthy food offerings at $10 a piece.

“I never really imagined that we would be marinating chicken thigh overnight and serving it hot and cutting it in front of the customer, and serving some of the best proteins of any fast-casual chain,” Kenner says. “These things evolve and change and take years to really become your best self. I think we’ve hit a stride at this point where there’s always opportunity, but we really feel like we could not be prouder of the product and the experience we’re giving our customers now.”

Through the pandemic, Just Salad relied heavily on its digital presence. An increasing number of consumers ordered from home instead of the office, which meant Just Salad had an uptick in nighttime business. While the Just Salad executive team is back in the office now, there was a time where they were remote and everyone’s lives were up in the air. But as a team, Kenner says, they used working toward Just Salad’s mission as an outlet versus something that weighed them down during a difficult time.

Of course, in the beginning of COVID-19, Just Salad had to let go of some employees, but Kenner says they stayed close to them and kept the majority on. Because of this, the chain has not experienced the same type of labor shortages others are facing right now.

Store-level employees are able to see their colleagues get promoted, so Just Salad doesn’t have to sell them on the opportunity. They already see it and feel it, Kenner adds.

Just Salad is also fresh off a capital raise with Closed Loop Partners in addition to having continued support from Panda Restaurant Group, the parent of Panda Express. In the case of Closed Loop Partners, Kenner says the investment is a vote of confidence in Just Salad’s reusable bowl program and sustainability efforts at large in terms of carbon emissions, packaging. and waste.

More and more, customers taking notice of Just Salad’s sustainability mindset and want to associate with them, Kenner says. In every avenue, the chain wants to do more, he says.

Just Salad has the largest restaurant reusable program in the U.S., it claims. The brand’s reusable bowls save a “tremendous” amount of plastic and carbon per year, Kenner says. What’s more, Just Salad was the first chain to carbon label its menus and create a “climatarian” lineup that guides guests toward more sustainable eating. It also pioneered plant-based Daring Chicken.

“We really want to continue to push this industry forward from a sustainability perspective and be the gold standard and show what’s possible,” Kenner says.

Looking ahead to Just Salad’s growth, the brand is opening up new stores at a fast rate. It hopes to hit its 100th store in the next two or three years, doubling unit size.

“The pace is pretty intense, but at the same time, we’re not managing towards a number and if we don’t see the right opportunities, if something doesn’t feel right, we won’t do it,” Kenner says. “So it’s a goal that we’re not afraid to miss but certainly one that we’re aiming for.”

So far, Just Salad’s focus has been on company-run store growth. Relying on franchisees can be a safer bet when chef-focused fresh foods aren’t involved, Kenner says.

“I think franchising frozen or fried food is probably a little easier than fresh food that’s a little bit more culinary driven,” Kenner says. “That being said, we always have kept an open mind, and accelerating franchise growth is certainly possible in the future. It’s just not a focus today.”