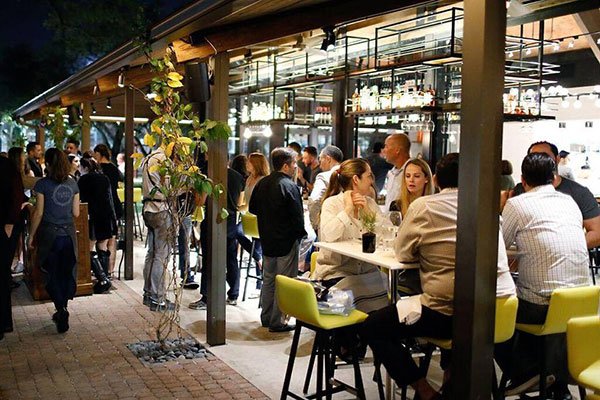 Passing “Grovites” walking their dogs wave to Matt Kuscher through the window of his newest restaurant-in-waiting as he talks on the phone.

“Coconut Grove is the only neighborhood in Miami where people wave to you — actually wave hello,” Kuscher said.

Thanks to the still-mild weather, he can ride his orange bicycle with the basket up front the two blocks from his house to Lokal, the Coconut Grove restaurant everyone except his father told him would never succeed when he opened in 2010. Six years later, he can ride from Lokal, which has been a huge local hit, to his latest restaurant in the Grove, the seafood-specialized Spillover, in yet another dead area next to the Mayfair Hotel that everyone warned him against.

He’s ready to prove them wrong about the Grove again — and this time he’s got big-time back up.

Chef-driven restaurants catering to foodies are supplanting the chains and bars aimed at tourists and college kids.

Eating House chef Giorgio Rapicavoli signed on to run the kitchen at Glass & Vine, a restaurant that reclaimed the old “Glass House” chamber of commerce, overlooking Peacock Park. International/local chef and restaurateur Michael Schwartz opened a branch of his successful Harry’s Pizzeria one street over. And he signed a deal to open a sprawling indoor-outdoor restaurant in the spirit of Michael’s Genuine Food & Drink in late 2017, serving breakfast, lunch and dinner at the base of an upcoming highrise at Tigertail Avenue and Mary Street.

They followed Panther Coffee, drawing skinny-jean youths in Elvis Costello glasses when they opened in the Grove in May of last year. And everyone locally is buzzing about a pair of new restaurants: Ariete, headed by Michael Beltran — who studied under chef royalty Norman Van Aken and Schwartz — recently received a three-star review by the Miami Herald; 33 Kitchen earned a 3 1/2-star nod a month ago.

“Michael and Giorgio are renowned throughout the country and the world, so the fact they’re coming here means something’s happening in the Grove,” Kuscher said.

The Grove is having more than a moment. It is capturing Miamians who once drove by the neighborhood on their way to chef-driven restaurants popping up in Wynwood, Brickell and South Beach.