Another condo bust looms in Miami 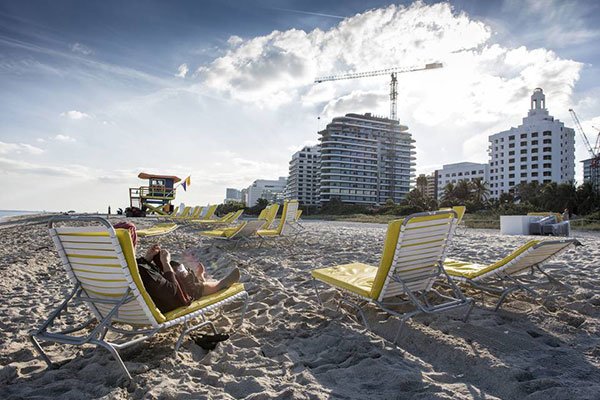 Miami is facing a condo bust—again.

Developers have started canceling projects, slashing prices and offering incentives such as private-jet access to spur sales, an ominous echo of the housing crash that pounded South Florida especially hard.

Easy financing and rising prices prompted developers to build about 21,000 condos in the downtown Miami area from 2004 to 2008. Many of those units sat empty for years.

Developers say this time they have insulated themselves by requiring buyers to put down 50% deposits by the time buildings break ground and by canceling projects instead of moving forward as the market slows.

Still, it may not be easy for some to sidestep the damage. In the fourth quarter of 2015, the number of Miami Beach condo transactions declined nearly 20% from a year earlier, while inventory jumped by nearly a third, according to a report from appraisal firm Miller Samuel Inc. The median sales price slipped 6.6%, according to the report.

“The condo market has peaked,” said Neisen Kasdin, a real-estate development lawyer at Akerman LLP in Miami. “Sales velocity has slowed down considerably.”

At the same time, stock-market turbulence has made wealthy locals hesitant to undertake big purchases. Luxury-home prices in 10 global cities analyzed by broker Knight Frank LLP are expected to increase by 1.7% this year, down from 3% growth in 2015.

Carlos Rosso, president of condominium development at Related Group, Miami’s largest condo developer, said he sells about 20 units a week in the Miami-Fort Lauderdale area, versus about 100 a week last year. In response, the company priced its new Auberge development, a 60-story project in downtown Miami, at $600 a square foot, compared with the $850 a square foot it might have asked a couple of years ago.

If Related and its partners hadn’t decided to lower prices, they probably would have had to wait until the next cycle to start construction, Mr. Rosso said. The project launched two months ago and Related has sold about 70 units out of 350 so far.

“It’s a marathon and it’s not a 100-meter chase,” he said. “This is the part of the marathon where we are running a little bit slower.”

Other Miami developers have put on hold or canceled more than half a dozen projects planned earlier in the cycle, from the Ion East Edgewater, a 35-story tower planned by a local Florida development firm, to Krystal Tower, a downtown tower planned by a Brazilian developer, according to consulting firm Integra Realty Resources Miami. Overall, the pipeline of units in active projects in Miami has shriveled by 42%, according to a report released a month ago by Integra.

At the Aurora, a new 61-unit building off the Miami waterfront, the developer is offering buyers a free membership to JetSmarter, a service that allows members to use shared private jets for free.

Tim Lobanov, managing director of Verzasca Group, which is developing the building, said the perk has a retail value of about $12,000 and is part of the project’s pitch to appeal to New Yorkers. JetSmarter offers flights several times a week from New York to southern Florida.

Miami developers said they are seeing increased demand from New Yorkers and Chinese buyers looking to buy second homes, but that is unlikely to replace the sharp drop in demand from South Americans.

“The depth of the Chinese market, or the European or Canadian market, is not enough to make up for the South American buyer,” said Anthony Graziano, senior managing director at Integra.

While people across the industry acknowledge the market is slowing, they say low debt levels and a slowdown in new projects will prevent the massive oversupply they saw during the last bust.

“I don’t see this as the bloodbath that we had last go around at all,” said Gil Dezer, president of Dezer Development, builder of high-end Miami condos such as the Residences by Armani Casa, which has seen sales volume plunge to six a month from 20.

Overall, about 1,200 condo units in Miami were delivered last year, down from the peak of 10,000 units in 2008, according to Integra. But with more than 7,300 units under construction, inventory is expected to increase.

Most Miami developers have protected themselves by taking a page from the South American markets. Many now require buyers to pay a 50% deposit on the total cost of their units by the time the project breaks ground. Developers don’t break ground until the project is 80% sold, which means the deposits are enough to cover a significant portion of the construction costs. During the last cycle, by contrast, developers required only 20% deposits and allowed buyers to flip their units while they were still in contract.

Related and a few other developers have since loosened their deposit requirements to 30% from 50% to spur more deals. Mr. Rosso said Related does that only when it already has secured a construction loan and doesn’t need the additional deposits to cover building costs because the building is 80% sold.

Still, Mr. Rosso said the company doesn’t anticipate breaking ground on many new projects in Miami in the next couple of years and instead will be focusing on projects in places like Argentina and Mexico.